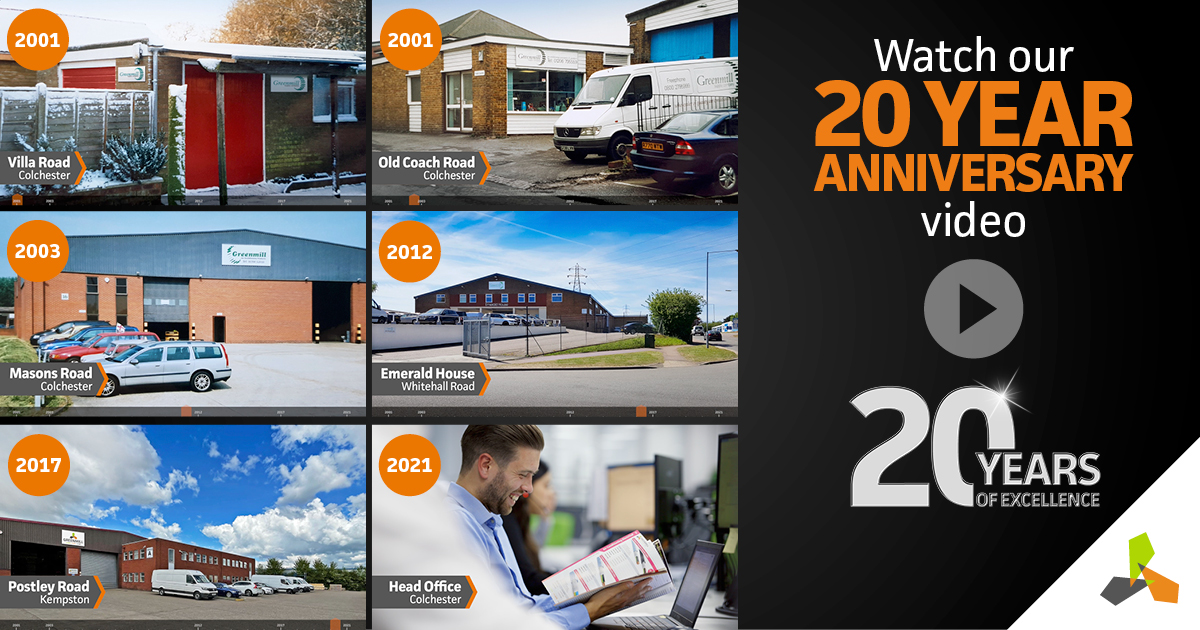 This year is Greenmill’s 20th Anniversary. When we started the company in 2001, we had a pretty clear vision for Greenmill, and that original vision is still as strong and relevant in 2021...

From the beginning we wanted to build a business that put customers at its centre. But first we had to build new doors for the old garage we were based in. As cosy as that garage was (especially with new doors), we always had ambitious plans for growth.

The opening of our first small trade counter in 2001 (with the added luxury of actual warehouse space), was swiftly followed by a succession of moves to larger premises, as Greenmill continued to expand. Like all businesses, our journey hasn’t been a completely smooth one. Inevitably, there have been a few bumps along the way, and maybe we’ve taken the odd wrong turn here and there (we’ll leave you to guess which ones).

However, after 20 years of planned and sustainable growth, Greenmill is now one of the UK’s leading suppliers of AC, Ventilation and Heat Pump install materials. Our team has achieved this by focusing on what’s important, giving Greenmill customers what they want, when they want it. In fact, this approach is so central to our business that it even has its own catchy name “focustomer” (which admittedly sounded a lot catchier in the original brainstorm).

None of us can predict what will happen over next few years (especially given the past 15 months, which have been extremely tough for everyone). But you can be sure that we will continue to challenge ourselves, build our customer experience and always strive for the vision we established 20 years ago. In Stock, On Site, On Time.

...watch our video celebrating 20 years of excellence below.

Our latest Issue 5 Hybrid Hub supplement brings Greenmill's comprehensive range of Hybrid and Pressfit install materials together into a handy, pocket-sized catalogue. Spread over 40+ bumper pages, this supplement is one of the few catalogues to feature both RLS (Rapid Locking System) and Conex

Issue 14 of the Greenmill Trade Bulletin has landed with customers; we hope you'll enjoy reading yours. If you haven't yet received a Bulletin Issue 14, or would prefer an electronic version you can download a copy here. Issue 14 focuses on Hybrid and Pressfit. We’ve got the latest Issue 5 Hybrid

It's Jan, so must be time for new Promo500 gifts. We've got a really massive mug for only the coolest engineers, plus a tough bucket that's perfect for tough jobs. And because it's still nippy, we've got some great gear to get you warm and cozy. Or you can claim a 1000 Point Customer Rewards Voucher

Edition 5 of the Greenmill Customer Rewards Catalogue is available to download now, and this one has a bit of a sports theme. Edition 5 introduces a great range of sporting gifts, including golf and cycling gear. And with the World Cup underway, we've got some great footie gifts including Mitre